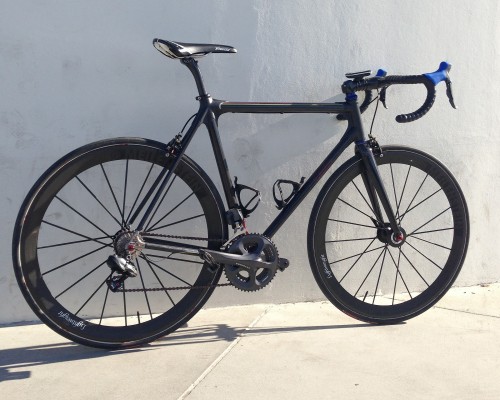 I’ve been a bit radio silent, but that’s a good thing, at least for me. It means the weekend was full of riding.  Saturday was an incredibly pleasant jaunt in Griffith Park, in perfect weather, and with plenty of like-minded people along for the ride. Griffith Park is my favorite place in Los Angeles, and I marvel that such a place exists in the middle of the city. I did several turns up and down the different climbs, and in the end climbed over 3000 feet. Great day. Then, on Sunday, I rode with a good friend up Nichols Canyon, and then west along Mulholland. Not as much climbing, but we managed to get in close to 35 miles cruising the streets of LA. Excellent weekend of riding. And, one reason for the fun this weekend, and every weekend for the past few months, has been the Calfee Dragonfly you see pictured above. I’ve had this bike approximately two months, and I am close to giving up the TR6 for the bike. OK, maybe not the Triumph, but oh how I would love to own this bicycle. Calfee appeals to me on many levels, but first and foremost, is the fact that the bike is homegrown-made right here in beautiful California. There are few carbon frame manufacturers in the US, so few in fact, they can easily be counted on your fingers. Calfee is one of the most established. Craig Calfee started building carbon frames back in 1987. In 1991, Calfee built 18 frames for Greg Lemond’s Team Z, and branded as Lemond frames, these were the first carbon fiber bikes to race in the Tour de France. In 1997, Calfee Design was founded, and shortly thereafter, in 2000, the Dragonfly debuted. I’m skipping over a lot of history, but the overall gist is that Craig Calfee has been in this business a very long time, and has been an instrumental innovator in bicycle design.

So, I’d been eying the Dragonfly since I first saw it, and this year at Interbike, I was able to set up a test. I received the bike at the end of November, and I have been using it exclusively since then. There is always a bit of a break-in period when riding a different bike, and I was worried that this would be the case with the Dragonfly. Surprisingly, this did not happen. A few simple adjustments of the saddle, and off I went. The bike immediately felt welcoming. The ride quality of the Dragonfly, especially the way the bike smooths out the bumps and potholes, which are  commonplace here in Los Angeles, is incredible and unmatched by any other bike I’ve ridden. As a professed weight weenie with a sub 14lb bike at home, I was thinking the 15lb Dragonfly might be a bit more work up my local climb, but this fear was completely unwarranted. The Dragonfly climbs as well or better than any other bike I’ve ridden. One other very important aspect of a bike’s design is how well it descends. Most bikes will go down a hill quickly with little effort, but how stable and in control you, as the rider, feel is what’s truly important. One of my local test routes to suss out this particular quality is the descent on Topanga Canyon Boulevard down to the ocean. I admit, on this particular occasion, I was not trying to set any kind of speed record, but once I got home and checked the Strava account of the ride, I found I reached 53.9 mph on the descent. What’s important to note is that during that descent, the Dragonfly felt perfectly stable the entire time. Never did the bike twitch or shudder in any way that told me I needed to slow down. I suppose this could be looked at as a dangerous trait, but I am all for stability while descending. I prefer to rely on my better judgement to slow down, rather than  have the bike signal me with shudders and shakes. The ride quality of the Dragonfly is excellent, and I admit I have trouble thinking of going back to my personal ride after these last few months of riding near perfection.

Another point to make about Calfee’s designs is the battery integration for the newer electronic gruppos. When I first spied electronic shifting on a bike, I felt as if the design process was never really completed. Shimano, and then Campagnolo, both attached the battery to the exterior of the frame, sort of like an afterthought. It always bothered me to see the battery, and apparently it also bothered Craig Calfee. He was the first to devise a system of hiding the battery in the seat tube. To take it a step further, he also hid the control unit in the stem, and concealed all the wiring through the bars, into the stem, and on through the frame, down to the derailleurs. The system is absolutely seamless, and aside from seeing the small motors on the derailleurs, you’d be hard pressed to notice the bike has electronic shifting. To charge the battery, there is a discreet port on the seat post, making the process as simple as plugging the bike into the wall. The integration is perfect.

Lastly, Calfee Design is known for their masterful carbon frame repairs and modifications. A friend took a Cervelo R3 SL to Calfee for a custom modification to conceal the battery in the seat post tube. The work done was flawless, and the repaint perfect. I’ve also seen photos of work done on cracked carbon frames, and they look like new when completed. Craig Calfee’s reputation in this is without comparison, and if I ever needed to repair a frame, he’d be the only person I’d speak to about it. Calfee has mastered carbon frame design, and the Dragonfly is just one beautiful example of his work. Maybe the Triumph should go on the block. Hmmm.