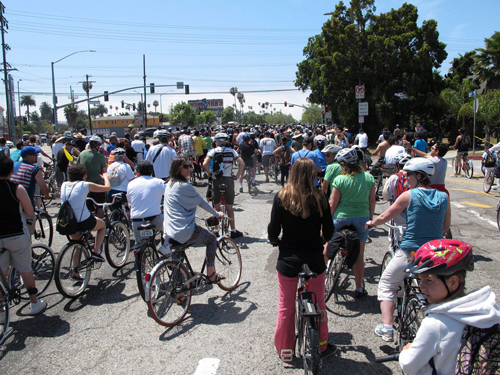 CicLAvia took place yesterday, and, as always, I had a great time. The route to the sea was more crowded than any of the previous rides. One estimate in the LA Times put the number at 150,000 people. That is an impressive number. Of course, the going was slow, so for those cyclists actually wanting to get to point B from point A, it may have been a bit frustrating. I beat back the frustration, and just started to enjoy the general feeling of revelry. There were so many different people and bikes, it was hard not to enjoy being in such an atmosphere. At the beach, the sight was amazing. There were bikes everywhere, from the boardwalk down to the water’s edge. Everyone out just enjoying the outdoors. The ride back to mid-Wilshire was probably my favorite part of the day. CicLAvia had shut down at 3pm, but there were so many cyclists still on the road at 5pm, that we commandeered the right lane of Venice Blvd., and peacefully rode home. It made me think it might be a good idea to propose closing down the right lanes of a major thoroughfare each weekend, and doing a CicLAvia lite. It was such great fun, and the cyclists and cars seemed to get along fine. It was an amazing feeling cycling with so many others, reminding me of a ride up Market Street in San Francisco. Los Angeles has come a long way for cyclists, and seems to be continuously improving. CicLAvia can be directly linked to this improvement, and I am eternally grateful to those who work so hard to put this event on. For those in agreement who might like to help out, please donate to the cause here. Thanks to Marianne Sadowski for the photo.