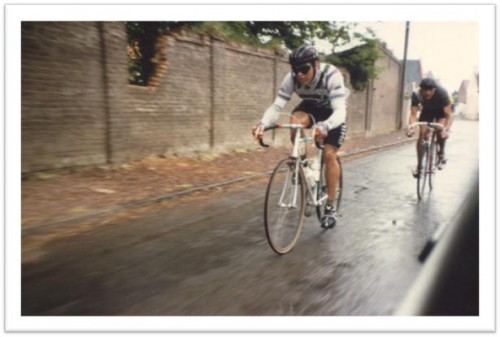 I have featured Allen Edmonds often on Velospeak, but today I thought I would feature Colin Hall, CMO/GM of International Business at Allen Edmonds. I approached Allen Edmonds last year because I wanted to feature companies that manufacture in the United States. Almost immediately upon making the connection, I discovered that many of the folks behind the scenes at Allen Edmonds are cyclists. Colin Hall is one of them, and he’s not just any cyclist, but one who raced throughout the ’80s. Colin started his athletic resumé in 1980 at the age of 15, competing in a half Iron Man, and finishing in 8th place. This was remarkable, as he was the only entrant under the age of 18. In 1981, he was the Michigan State Jr Road Champion and took 2nd in the Michigan State Jr Time Trial. In 1982, at the National Sports Festival, he made the winning break with Davis Phinney, Andrew Weaver and Andy Hampsten. On a side note, Andy Hampsten was Colin’s roommate at the time. In 1986, Colin went to Europe to race for the French amateur squad, “Deska.” During this period, he raced in the amateur Paris-Roubaix as seen in the photograph above. At the end of the ’80s, Colin returned to Dartmouth to finish his studies, and soon after leaving school, he entered the workforce. He still cycles today, while simultaneously helping to maintain Allen Edmond’s position as a high quality shoe manufacturer. After my many years in the cycling world, I’ve come to appreciate how the cycling community is a group of incredibly friendly and high achieving people, and Colin Hall is no exception. I should have guessed that behind such a great company is a group of committed cyclists.