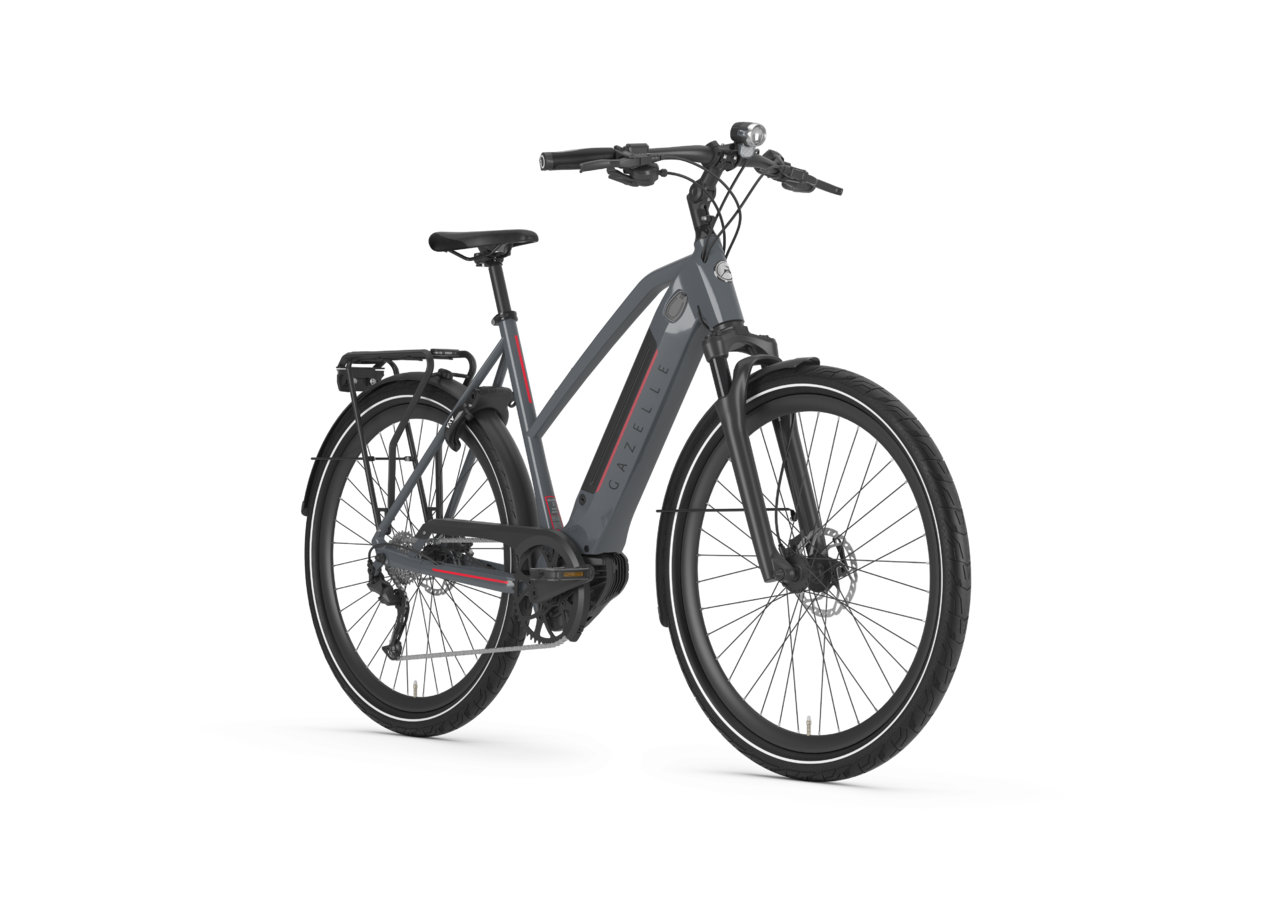 Once in a great while, I receive a bike to test that blows my mind. That is the case with the new Gazelle Ultimate T10+. What sets this bike apart from the myriad e-bike choices? Well, first things first.

Gazelle is a Dutch brand that has been in the bicycle business for over 128 years. Being Dutch, city bikes are their thing, and for the North American market, they offer eleven different models. All eleven models are e-bikes, and the Ultimate T10+ is their top of the line offering. The Plus designation is purely for its 28mph assist level.

Before going further, I want to point out some things I’ve learned from riding several e-bikes. First off, the 3 class system: class 1 refers to pedal assist bikes with a maximum assisted speed of 20mph. Class 2 e-bikes are controlled via a throttle, and also have a maximum assisted speed of 20mph. Class 3 e-bikes are pedal assist with a maximum assisted speed of 28mph. I am personally not fond of class 2 e-bikes. If I have a throttle, I tend to use it, and I’d never pedal. This somehow seems like a bad idea. Class 1 requires pedaling, but there is an odd point that is reached when the motor stops assisting at 20mph – it creates a weird lag. It’s not a complete deal breaker, but it is a strange sensation. Class 3 is what I prefer because the 28mph assist allows you to reach a comfortable 24mph without hitting the 20mph limit of class 1 e-bikes. It’s not that I always go 28mph, it’s just that I don’t want to hit that odd wall created by the 20mph limit.

So, back to the Ultimate T10+. The bike arrived fully assembled. Out of the box it came, and the only adjustments needed were seat height and turning the handlebars to their proper forward position. Most people needn’t worry about this as the bike will be bought through a local bike shop, but I bring this up to point out that once I made the two adjustments, the bike was ready to go. The gears were perfectly set. The tires were inflated. No fiddling with anything at all. It’s not often this happens, and I think it is a testament to the quality of assembly Gazelle puts into these bikes.

The ride of the Ultimate is what sets this bike apart. The geometry of the frame, the carefully chosen components, and the large e-bike specific tires work together to create an experience that is undeniably a blast. The bike is quick and nimble, corners perfectly, and smooths out the bumps with the e-bike specific front suspension fork. The first ride was bliss, and every ride since has been eye-opening. I find it hard to believe that an e-bike, with its heft (approx. 55 lbs), can be this much fun. I wanted to see how it did climbing, both for handling and battery life, so I took it on a short ride up to the Griffith Observatory. The ride was about 20 miles with almost 1400 feet of elevation gain. The bike was set at Turbo mode for the most part, and it handled the ride perfectly. Climbing is a breeze with the assist of the motor, and descending is a blast because the bike is incredibly stable on fast descents.  I even tackled a short section of dirt trails, and the Ultimate was up to the task. Upon arriving back home, I still had enough battery for a couple of trips to the grocery store.

The Ultimate is also quite the utilitarian bike. There are lights, front and rear, fenders, and a rack and kickstand. There is even a wheel lock with key if you’re in a pinch and need to run into a store. The bike has a 59 pound load capacity, making it a super utility bike.

Gazelle has hit it out of the park with the Ultimate T10+. It can be used for utility, but it also excels for fun adventurous rides. I said earlier that the bike blew my mind, and as testament to that, I actually purchased it after the test. It’s that good. 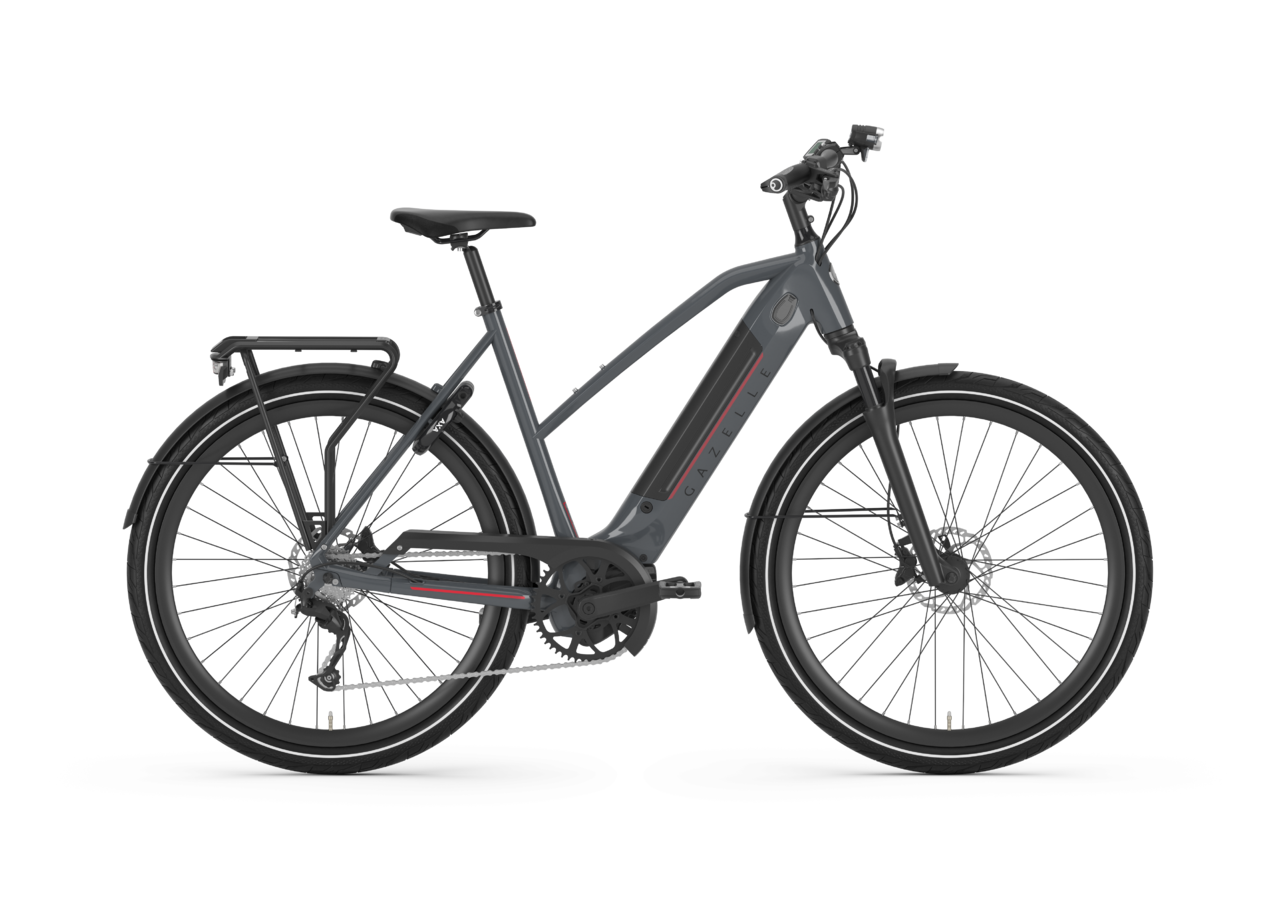