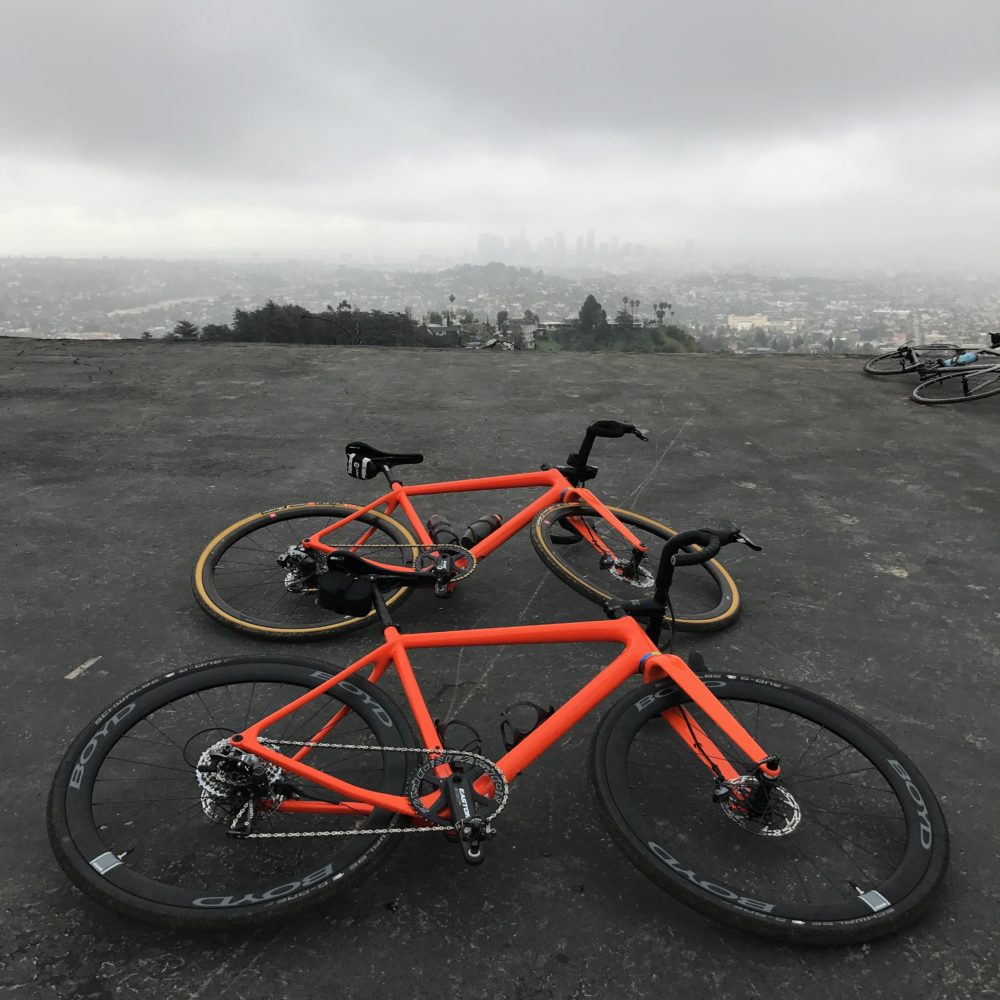 The photo above was taken when Sunday’s ride was still all about fun, enjoying the company of friends, and enjoying Griffith Park, one of my favorite places to ride. We tackled Nichols Canyon first, then dropped down Mulholland to the 101, over the bridge, and to the back side of the park. Then we rode up and around to the blacktop – an iconic spot in LA for cyclists, runners, and the many auto commercials filmed there. The ride was mostly dry with the exception of small streams crossing the road here and there, runoff from the last storms to barrel through LA. But, as we reached the Observatory, it started to drizzle ever so slightly. So, I told myself I would be extra cautious on the descent down to Fern Dell, and I was. But, sometimes being careful just isn’t enough.

I made it about halfway down, when in a flash, my front wheel, followed closely by my rear wheel, slid out from under me on one of the turns. No drastic movements on my part, the tire just let go, and the bike slid out. As I skidded down the road on my butt and leg, the thought that flashed through my head was “will the Open U.P. be alright”? I know I’m supposed to be more concerned about my own well-being, but I just finished building this bike, and dammed if I wasn’t going to be more concerned about it. Down I went, and hard. Once I came to a stop, I sat up, my friends came around, and I surveyed the situation. My beautiful Assos bibs and jacket were completely shot. A gaping hole in the butt of the bibs, and several punctures in my favorite jacket. Where there is a hole in a pair of bibs, there is bound to be road rash, and sure enough, I am blessed with two rather large sections of road rash, one on my butt, and another on my lower leg. After surveying myself, I went on to the bike. It wasn’t that I felt I came first, it was more of a delay tactic to put off seeing any damage to the beautiful orange paint.

I slowly ambled over to where the bike had come to a stop, I picked it up, and like someone studying a painting in a museum, I looked it over very carefully. Expecting to find some kind of damage, I was surprised by the lack of any mars or scratches. Somehow, the way I fell, the bike skidded along on the hoods of the brake levers. Those are seriously scraped, but by taking the brunt of the impact, they sacrificed themselves for the good of the bicycle. So, then on to the always fun part of a wreck, getting back on the bike and heading home. I tried playing it cool, pretending that nothing hurt, that the blood running down my legs was just a small flesh wound, and that the gaping hole in my shorts, exposing my raw and bloody butt cheek, was just the result of an average Sunday bike ride. Once home, the real assessment begins. Gingerly peel off the bibs and jacket and see the true nature of the injuries, clean everything out, bandage the wounds, and put on super comfortable clothes. Then, the most important thing, clean the bike to determine if it really came through unscathed. Cleaning a bike while not being able to move very well is no easy task, but as other cycle aficionados might understand, this is absolutely necessary. I went through the process, clearing off the mud, wiping down the frame, cleaning the wheels and tires, and wiping the chain, and to my pleasant surprise, the bike was perfect. The brake levers need replacing, but that’s alright, as I’m anxiously awaiting the release of the new Dura Ace 9170 hydraulic brake levers and disc brakes, and now I have a reason to get them.

The day definitely awoke the hidden feeling of vulnerability on the bike. In an instant, the bliss of a ride turns into an excruciatingly painful reminder that things can go sideways in a flash. It had been a very long time since I had gone down on a road bike, and I hope I get another 20 years of incident free rides that highlight the best of what the sport has to offer. The road rash I am sitting with today is definitely a reminder that the good days are actually more than that. They are excellent days.