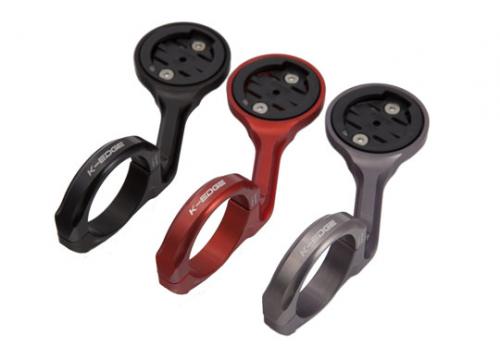 While at Interbike, I was fortunate enough to meet Joe Savola of K-Edge. It is not often the co-founder of a company will take time to walk you through the product line, but Joe did just that. He easily spent the better part of half an hour showing me each and every mount K-Edge has developed in the company’s short history. K-Edge was officially founded in May of 2009 when they launched the product that would define a segment within the cycling industry: the K-Edge Chain Catcher. It instantly became a necessity amongst the pros, and quickly carried over to the consumer market. A small, but incredibly disabling problem had been solved with a relatively simple device. From that point on, the company developed a solid product line comprised of computer mounts, GoPro mounts, and the chain catchers. At the show, Joe gave me a sample of the Garmin computer mount shown above. The mount is made in Boise, Idaho, and is machined from billet aluminum. It has an advanced injection molded Garmin interface that gives a solid and audible click when mounting the computer. The mount is attached to the bars with a simple clamp mechanism. The screws on the clamp are to be torqued to 2 N-m. Once set, this mount does not move. I’ve already had the chance to put several hundred miles on it, and no matter how bumpy the road, the mount keeps your Garmin solidly in place. The edges of the clamp are chamfered to prevent any damage to even the most precious carbon fiber handlebars. It weighs a mere 32 grams, and comes in anodized black, red, or gunmetal. And, because of the high quality, every product manufactured by K-Edge is guaranteed for a lifetime. There are other companies making mounts, but I am sticking to those manufactured by K-Edge.