Keep Your Bike Inside the Box 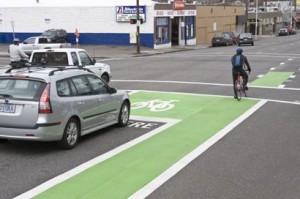 The bike box at SE Hawthorne and 7th in action. (Photo by Jay Lawrence/Polara Studios)

Imagine chilling at an intersection, waiting for the light to turn, catching your breath in your very own designated area, with Portland, Oregon’s new bike boxes you have your very own space while waiting at an intersection, increasing your visibility and establishing your space, While you pause inside the green box in front of the pedestrian crosswalk and vehicular traffic, cars line up behind you. You’re no longer marginalized to the right as a cyclist, vulnerable to turning cards. Your hold just as much importance as the ones driving the big machines! Portland isn’t the first city to institute the boxes, Just the city to get the most press for it, New York City had over sixty bike boxes before Portland started painting theirs. Maybe your city will be next, inviting you to join the movement while you pause at the light.