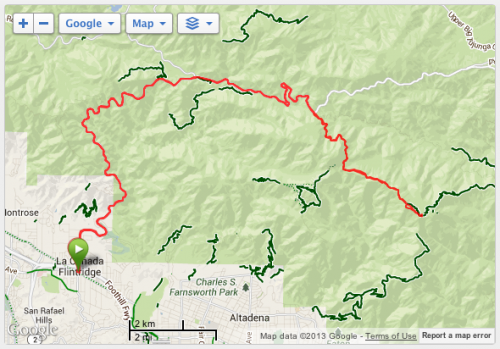 On Sunday, I had the opportunity to do a ride I’ve been wanting to do since returning from Switzerland. I wanted to take advantage of all the climbing I had done to tackle one of the classic Southern California climbs before losing all the conditioning I had gained while traveling. Mount Wilson was the goal. The meet up point was the Shell station in La Cañada Flintridge at 8am. It took a bit of motivation to get out of the house so early after a late night, but I managed. Once there, I met up with the group I was to ride with. I knew one person, the rest were new meets. A bit of early morning introductions, and we were off. The pace was moderate, and the temperatures high. At select turnouts, we would re-group, making sure no one was left behind. I felt good on the climb, and by noon, we were atop Mount Wilson. The unusual part of the ride for me was the company. I tend to ride by myself or with one friend, as my schedule makes it difficult to join group rides. On this occasion, I was able to commit the time, and was rewarded for it. I made new friends, and it’s interesting that the part I remember most from the day is the conversations I had on the climb. It was so much fun speaking with people from all different walks of life who share a common passion. It also confirmed what I’ve always believed: that cyclists are a friendly and smart bunch of people. I hope I’m able to do group rides more often as the camaraderie is worth every moment of the suffering going up the mountain. My Sunday was incredibly enjoyable, and the company more than made up for the horrible new paving on Angeles Crest Highway. Here’s to riding with friends and strangers.