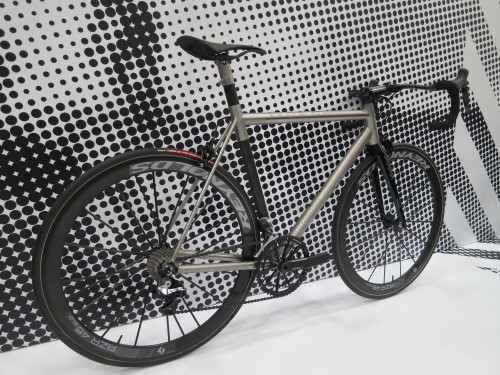 I have received little news from NAHBS this year. Normally I am flooded with photos of beautiful lugs and specially made leather bags suited for a single can of beer, but this year has been abnormally silent. Did the absence of some of the more important brands in the handmade world put a damper on the show? Maybe, but I’m sure it was still a hoot, and certain companies did stand out. One such company is No. 22. They showcased a new road bike dubbed the Reactor. The bike is mostly titanium with a carbon seat tube. Built as pictured above, the bike weighs in at 13.1 pounds. That is remarkable for a mostly metal bike. It helps that some of the parts are super lightweight, such as the brakes from Craig Edwards at eecycleworks. I imagine this bike will be a blast to ride, especially on the climbs. The rock solid build quality combined with the beautiful finish puts this bicycle on my top five list for most desirable rides. I hope I am able to see it at Interbike later this year, if not sooner.