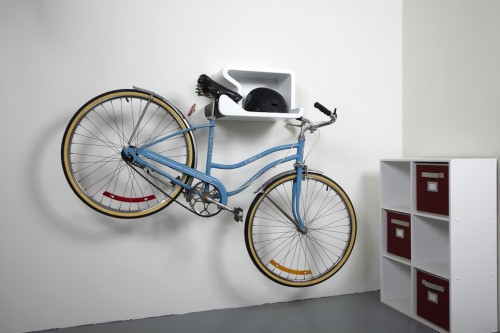 Jürgen Beneke, the former 1993 Downhill World Champion has launched a Kickstarter Campaign for the Shelfie. It is a home storage solution for any type of bicycle. The system relies on the saddle for hanging the bike, making it possible to hang any style of bike effortlessly. The Kickstarter has already funded, but there are a few days left to get in on the deal. I like the design, and would love to have this in my home.

The patent-pending Shelfie uses a bike’s seat to hang a bike on any wall, and features two integrated shelves for organizing and storing cycling gear. It is constructed of a durable, injection-molded tinted polyethylene plastic, includes wall-anchors and will hold up to 50 lbs. Final production models will be made entirely in the U.S.A. and will include two vinyl protectors. Shelfies are currently available through Kickstarter for $95, and the MSRP for production versions is projected to be $130.