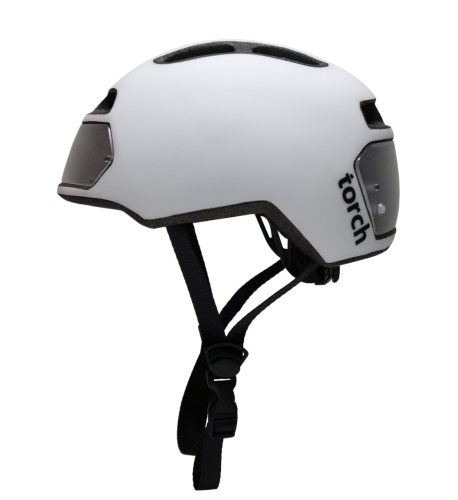 It’s happening. Fall is officially here, and the daylight hours are fewer. Usually I find the adjustment to be a difficult one, but this year seems different. I find myself wanting cooler temperatures, and haven’t minded the shorter days so far. Maybe that is due in part to the discovery of the Torch Apparel T1 bicycle helmet. I received this some time ago, but had not had the chance to properly take advantage of its best feature. This is a bicycle helmet that includes built-in front and rear lights. The lights are individually controlled, and have multiple settings, from constant on to blinking. The rear light is made up of five red LED lights, and the front light consists of five white LED lights. There are four settings for each set, and the lights are recharged using the trick USB cable that can charge both lights simultaneously. The helmet is incredibly comfortable, and I find that I don’t notice it while riding – a good sign. It has a simple adjustment wheel at the back, and the straps are also easy to adjust. So simple in fact, that it got me to ponder why some other helmets I’ve tried aren’t as easy to adjust. Another great feature is the airflow. I have the matte black version, a gamble when riding in LA because of the sunshine. I was pleasantly surprised by how cool my head remained. There are eight well placed vents on the helmet, all doing their job perfectly. This is a great helmet for riding in the city, and I find it a bit astonishing that such a simple and brilliant idea has taken this long to come to fruition. Thankfully, the folks at Torch Apparel did it with the T1 helmet, and in doing so provided another great way to stay safe while on the road.