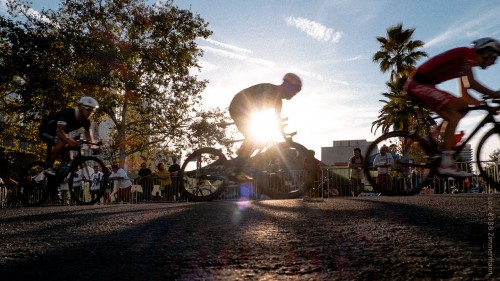 This past weekend I was able to get in a lot of good riding. Saturday I took a turn on the Calfee Dragonfly Adventure. I rode up to Mulholland, and then west. I kept on riding on the dirt portion until I reached the Backbone Trail heading down to Will Rogers. I hadn’t been on the Backbone Trail since my old mountain biking days, and I was excited to give the trail a go on the Calfee. The ride was excellent, and it really confirmed what I’ve known since childhood – Los Angeles is an excellent city for cycling. The roads and trails are some of the best I’ve ridden anywhere, and the variety is astonishing. To drive home the point, I headed downtown Saturday evening to check out more cycling at the Wolfpack Hustle Civic Center Crit. This was the second edition of the race, but the first I attended. I was quite impressed with the event, and having City Hall as a backdrop was absolutely beautiful. Los Angeles has turned a corner in terms of cycling. Every day on my commute to work, I see more and more cyclists. People are taking to the streets, and I believe the secret is out of the bag: Los Angeles is a year round cycling destination. The beautiful photo above was shot by Loic Zimmermann.