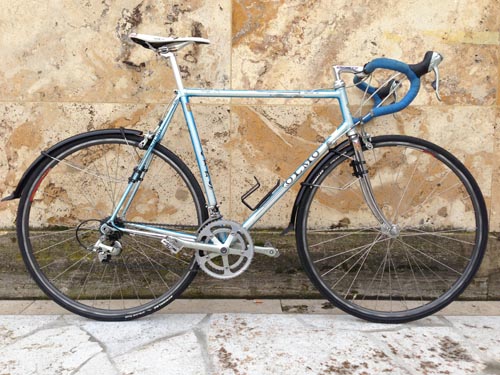 Yesterday I was given a full tour of Frankfurt by bicycle. The Olmo you see above is the bike I was lent by a friend to use for the day. The tour was incredibly enjoyable, and I marvel at how fun it is to see a new city by bicycle. I enjoy walking as well, but find it more satisfying being able to cover more ground by bicycle. I was taken to the West End, the North End, the East End, and the southern bank of the Main River. I saw industrial parts of the city, residential parts of the city, and everything in between. The bike lane system is quite complete here, with many of the lanes separated from the streets. Everyone bikes here. On Saturday it was pouring rain, and as I stared out my hotel room window, I saw a steady stream of cyclists braving the downpour. Even the weather doesn’t seem to deter people from the easiest form of transportation. Bicycles seem to be treated as equals to cars, thereby making it a much safer experience than in Los Angeles, a city where cyclists are still considered to be a bit of a nuisance. I know it’s changing in LA, but I wonder if cycling will ever be as accepted as it is in Europe.