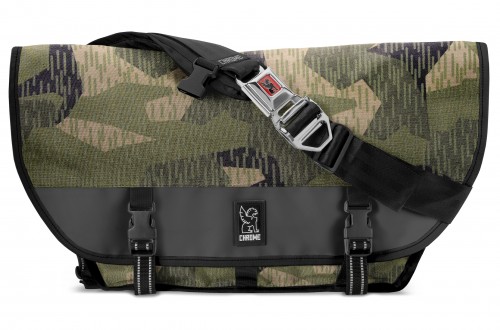 Chrome has updated its camouflage line with a new Swedish M90 geometric pattern that is reflective at night. It is a special edition, and can be had in the Victor, the Barrage, and the Citizen pictured above.

Chrome’s second issue of Reflective Camo is an updated version of how Chrome does camo. For this edition, Chrome found a Swedish M90 geometric camo, and overlaid a rain camo print with a special glass bead finish, which reflects light from up to 100 feet. During the day, these bags appear as Swedish geometric “M90” camo and at night the appearance in light is a reflective rain camo. Developed in limited quantities, the Barrage, Citizen and Victor are available in our versatile Chrome Reflective Camo 2nd Issue.

The bags are available starting today, and can be found at your local bike shop or online directly from Chrome.