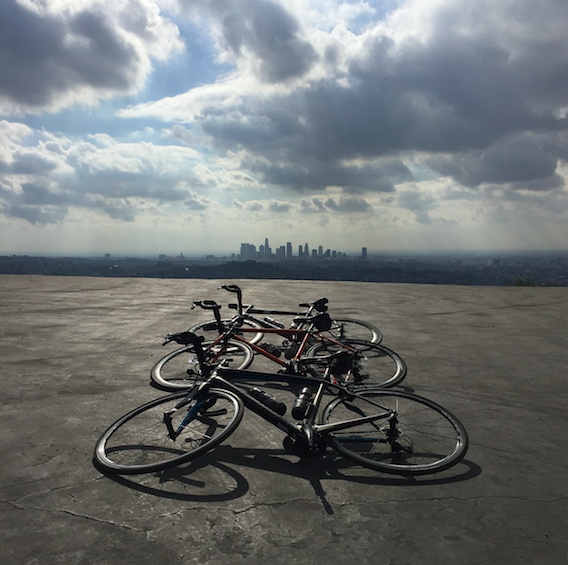 Sunday’s ride was one of those perfect rides. It started off feeling a bit complicated the day before, as I was working out the details of where and when to meet two friends along the way. But, I came up with a plan, and the next morning set off on a beautiful crisp day. I rode up to the base of Nichols Canyon at Hollywood Boulevard to meet one friend. This was a planned 8am meeting to avoid the La Grange group that typically gathers at 8:30 or so. The two of us leisurely rode up Nichols, with no PR’s in mind, just a pleasant climb with lots of conversation. Three quarters of the way up we were joined by another cyclist trying to get up to the top before being swallowed by team La Grange. All the typical subjects were covered, such as our bikes and where we got them, family life, and how to plan a ride around it, and the weather. Pretty typical for a Sunday ride. At the top, our new friend turned left, and the two of us continued on to Travel Town, our connecting point with my other friend. We were early, so we relaxed and chatted while waiting. Once the third man arrived, we headed up Trash Truck Hill. Conversation abounded once again, and before we knew it, we were at the summit. We turned left to head over to the Helipad where the above photo was taken. We sat and soaked in the view for a minute, and headed off. Friend number 3 could only join us for a short bit, so once at the bottom, he headed home. The two of us continued on up to the Observatory, dropped back down the hill, and then made a right on Beachwood to head to the Hollywood sign. We reached the summit, started the ride back down, and then headed to our respective homes. The pacing of the ride was unusual for me, as I tend to ride without stopping much – a definite mistake. Stopping and savoring the moment is essential. Why ride hard without taking time to enjoy the surroundings, smell the air and soak in the sunshine. It’s easy to forget to do all that when riding solo. That’s why I prefer riding amongst one or two friends. It’s not so many that the pack mentality takes over, but just enough to share the pleasures of a beautiful ride. Days like this are what cycling is all about.