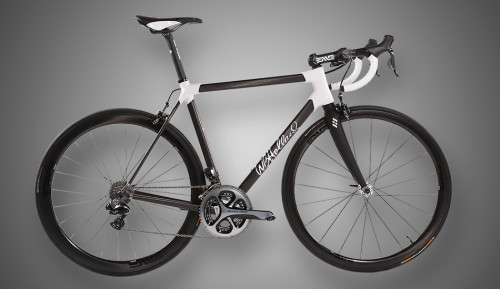 Holland Cycles is a name that has come up often in conversations about custom bicycles. Just a few weeks back, I was at a party where I met a gentleman who sang the praises of a Holland Cycles ExoGrid bicycle. He purchased the ExoGrid after owning a Holland titanium bicycle, and as he put it, it was a revelation. Now Holland Cycles is moving into carbon with the soon to be released Holland Carbon HC. I made the trip to San Diego to meet with Bill Holland, and the wealth of information I took away about the Carbon HC, the ExoGrid, and the titanium gravel grinder, was enough to make my head spin. Bill is unbelievably knowledgable about bicycle design. He’s been building bicycles for more than 40 years, and over that time has been refining his craft to near perfection. In the shop there are examples of the different builds he offers, and I can only say they are some of the most beautiful bicycles I’ve seen. I immediately started dreaming of a future build – a bike to last a lifetime, a bike to travel the world. This is a testament to the beauty I saw in the shop, as the pleasure of planning and daydreaming has become rarer in this age of immediate gratification. Bill’s generosity and graciousness in answering my questions makes me think the process of ordering a bike from him would be the definition of “bespoke” – a tailor fit build addressing every minute detail, leaving absolutely no stone unturned. I hope to demo an ExoGrid in the near future to experience what my new friend says is an unsurpassed ride quality. I will continue daydreaming of the perfect Holland Cycles build for me, and planning the way to make it a reality. For those looking for the quintessential custom bicycle, Holland Cycles should not be overlooked.