How To Clear The Mind 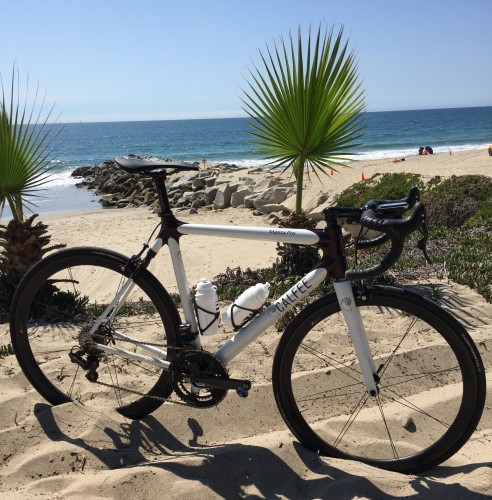 You may have noticed a lack of posts as of late. This can be attributed to the fact I’ve been working overtime on an installation. The opening date is October 1st, so life should regain some sort of balance then. In the meantime, over the weekend, I needed a bit of an escape from the apprehension of opening night. What better way to ease the nerves than go for a bike ride. Saturday morning I did my usual loop through the park. It felt amazing, but I still wished for more. On Sunday, the opportunity for a long ride presented itself, and I took it. I had heard there was to be a bike swap meet at Pedalers Fork, so a destination was set. I’d ride through the valley to Calabasas and have a stop at the swap meet. There, I met up with Gregory White of Magic Cycle Works. He had two of his beautiful bikes on display as well as miscellaneous items to sell. It was a quick visit, as I was determined to ride over the hills to the coast. I took Old Topanga Canyon Road and headed west. The weather, the lack of traffic, and the beautiful Calfee Manta Pro combined to make for one of the most pleasurable rides I’ve had in a long time. I wish the road had gone on for much longer, because as I rode, all my tension released, and I could only think about pedaling and taking in the smells and the sights. Cycling has always been incredible relaxation therapy for me, and I think if more people started riding, we would have a little bit more calm in the world. The photo above was taken when I reached the coast, a picture perfect Southern California day. All told, I put in a hair over sixty miles, and as each mile passed, I became happier. I will keep pedaling.