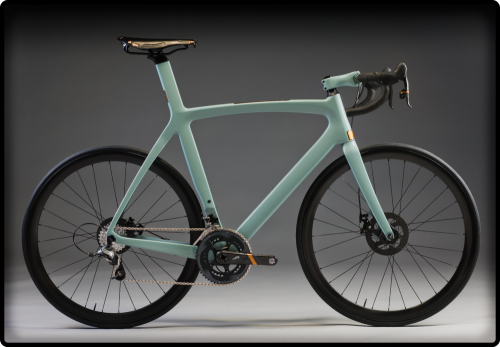 About a year ago, I stumbled across the Simpson Velorig website. I was immediately drawn to the site’s clean design, and was intrigued by the VR1 frame set available for sale. The company, based in Orange County, California,  is the brainchild of Michael Simpson. I reached out to Michael to learn more, and also to request a bike for testing. We met up many months ago, and he supplied a VR1 with a SRAM Force gruppo for tooling about Los Angeles.

It is always exciting getting on a new bike, and the VR1 was no exception. To begin with, its looks are striking. The carbon frame and fork are an unusual design in the cookie cutter world of carbon bikes. I asked whether the molds for this bike were custom and not off the shelf, and the answer I received was a resounding yes. Absolutely custom designed molds for a unique take on bicycle design. The frame is built to accommodate either mechanical or electronic shifting, as well as disc brakes. Simpson was an early adopter of the disc brake standard, and now that it is becoming more commonplace, I think the company made a smart decision spec’ing this out. The frame is available in four sizes, starting with a 54cm through to a 60cm. The frameset weighs in at 1290 grams for a size 56 with an uncut ISP. The fork is an additional 480 grams. The build I have tops the scales at about 17.5 pounds, a respectable weight for a disc brake equipped bike. Details on the builds, the testing, and the design, are all spelled out in great detail on the website. It is worth the read, and also refreshing to get such a straightforward explanation of the process.

Before describing the ride, I have to mention a fun aside. Without fail, every time I take this bike out, someone somewhere stops me to ask questions. Some days it is cyclists, other days just folks walking down the street. The bike is so striking, it gets noticed. From the frame design down to the simplicity of the graphics and colors, it is sure to attract attention everywhere you go. As I said before, this is not a bike that melds in with the other bikes in todays marketplace. It most definitely stands apart.

My first ride on the VR1 was up my usual climb in Hollywood. Nichols Canyon is a favorite, and as I ride it so often, I find it is a good testing ground for comparison to other bikes. Climbing is efficient with the VR1, as the stiff bottom bracket allows transfer of power to the road without sacrificing any of your effort. The 17 pounds may slow your times down over a 13 pound rig, but it feels excellent going uphill. Descending is where I think the VR1 stands out. It is one of the most stable bikes I have ridden down a hill. I easily hit speeds of 45 mph without trying too hard, and I felt incredibly safe and stable doing so. The 28C tires contribute to the sure-footedness of the bike, as does the fork design. And long distances are no problem on the Simpson Velorig. I routinely took the bike on 5o plus mile rides, and felt great afterwards. I think the VR1’s handling easily matches its distinctive looks. This is a good all around bike for any type of riding.

The last point on the Simpson Velorig that is worth talking about is the price. The bike I have been riding is sold directly through the website for $4150.00. This is for the the complete bike with Force hydraulic disc brakes, carbon wheelset, and all components. This is a remarkable price considering the price of your average carbon bike these days. It is certainly not the cheapest, but it sits well below bikes from some of the other manufacturers. It’s a price point that should tempt folks to give Simpson Velorigs a try.