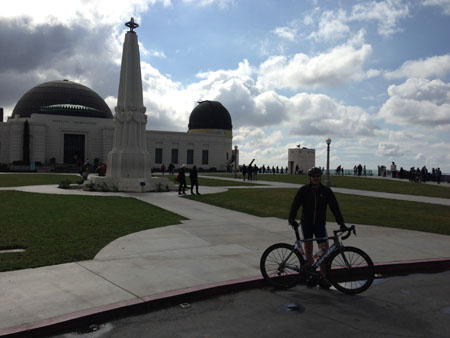 The last two weeks of January we had the pleasure of having a visitor from Switzerland. My wife’s brother stayed for a couple of weeks, and in that time, I was able to tour him around LA on a bicycle. One ride was the regular loop I try to ride each weekend, up to Mulholland, down the backside, and up and over Griffith Park on the closed road. I get such pleasure out of showing LA to people that don’t know it well, and this particular ride was out of the ordinary. One reason was the flawlessly clear skies. From the observatory, Downtown Long Beach was visible, with each and every tall building clearly outlined. San Nicolas Island was also easy to spot, and if you looked far enough south, the hills of Laguna could be seen. The air even smelled fresh, something that doesn’t happen all that often in our city. Another stand out on this particular ride was the wildlife sightings. Starting up the climb from Travel Town, a bobcat meandered across the street directly in front of us. This is only the second time I’ve seen a bobcat, and the first in Griffith Park. Then, on the descent from the Observatory, we spotted a pack of 4 coyotes. My brother-in-law was impressed with how much wildlife we spotted right in the middle of LA. I was happy to be on the bike, because if we had been driving, we would have missed the wildlife, the smells, the views, and quite a lot more. Seeing Los Angeles through other people’s eyes, makes me appreciate what a great city this is. Beaches, mountains, and warm weather all conspire to make this a perfect place to live, and an even better place to ride a bicycle.