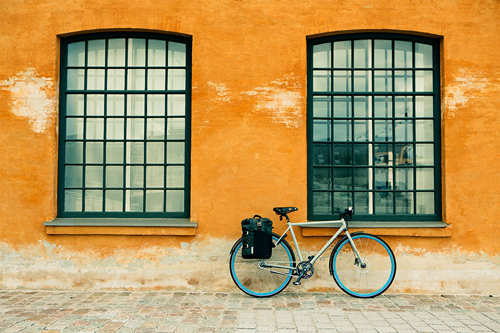 I will preface this post by saying I like what Thule makes. I’ve been using Thule roof racks for many years, and I find they sometimes outlast the car they are attached to. The luggage and backpacks are also rock solid. Then, last year at Interbike, I saw the prototype Pack ‘n Pedal system. I immediately wanted to try it. The thought of being able to mount panniers on almost any bike without any trouble at all was hard to fathom. Well, I waited until the final designs were released, and have now had the time to test the rear rack with the two larger panniers that are available. The idea behind the rack is that no special mounting points are needed because the rack straps onto the seat stays with a simple ratcheting system. I installed the rack on my Sycip, and found it was a really simple operation. More importantly, once tightened, the rack is rock solid. The load capacity is 25 kg on the top, and 18 kg on the side. It stays firmly in place even when loaded to capacity. The panniers are also quite slick, and have a simple attachment system. Pull the cord up, slip the bag onto the rack, and release. The system locks into place firmly. I have the Large Adventure Touring Pannier and the Commuter. Both bags are well thought out and have plenty of features to make the touring set happy. There are strategically placed magnets to keep the bags from swinging out on turns, smart bike light pockets, and compression buckles to keep the load secure. Both panniers are of the rolltop design making them simple to load. The Large Pannier is waterproof, while the Commuter comes with a rain cover. The complete specs are on the Thule site, but what the site doesn’t convey is how solid this system is. When riding, there is no noise at all. No rattles whatsoever. The only giveaway that the rack is installed is the weight of what you put in the panniers. The streets of Los Angeles present riders with an array of horrible potholes, bumps, and other obstacles, and in no instance did the rack or panniers wince under load. Not a sound. Thule has definitely come up with a system that merits being sold alongside their racks. I expect to start seeing cyclists using the Pack ‘n Pedal system for everyday grocery getting, to full blown touring. And, like the bike racks, the Pack ‘n Pedal system might outlast your bike.